Inaugurated in April 2008, Washington D.C.’s Newseum is the largest museum in the world devoted to information and the history of the news media, from its origins to the digital era. Housed in a new building on Pennsylvania Avenue between the White House and the Capitol, it sits in the historical and political heart of the city.
The seven-storey, 23,000 square-meter building includes exhibition galleries, multipurpose areas, theaters, commercial spaces, interactive workstations and visitor facilities. It displays over 6,200 objects associated with significant events in the history and evolution of the media, 35,000 front pages of daily newspapers, periodicals from all over the world, and a vast collection of photographs that together comprise the history of journalism. The building’s facade symbolizes the “window on the world” that the press represents: the text of the United States’ First Amendment engraved in huge bronze letters on marble blocks stands above an imposing glass wall. The glass invites passers-by to see the activities within the museum, while museum-goers look out to the White House and Capitol.

The size of the project was a considerable challenge – 42 cases arrayed over 100 meters of exhibit front as well as a central ‘spine’ with 344 exceptionally specialized display drawers. Most of the constructions were challenging due to their dimension, angularity, or mechanical complexity; especially the display drawers that comprise the central spine. The drawers had to be fully transparent and aesthetically beautiful, yet highly secure. Moreover, given that much of what they display - such as newspapers, magazines, and other print media – is easily degradable, high performance conservation technology had to be incorporated in every drawer.

Working in close association with the exhibition designers, Goppion engineered, built and installed the exhibition cases for the entire museum. The large, asymmetrical forms of the primary display cases are fully integrated with the building’s architecture but presented considerable challenges.

Goppion engineered and produced a triangular glass case with canted sides that embodies a one-of-a-kind opening system that allows a single operator to lever the top of one side clear of the case so that it can be slid out of the way on tracks concealed in the floor. Structural calculations and definition revealed that the unusual shape of the case would require using thicker-than-usual glass plates, which were ground down to the millimeter at our facility in Italy then assembled in place on site.
The wall display cases in the main gallery have operable single glass faces, some six meters in length and nearly three meters tall, that angle outwards at the top.
Goppion developed a motorized opening system for these cases that rotates the huge glass plates open along their length, improbably providing easy staff access. For the central spine, Goppion designed and created 344 self-closing drawers, each with an integral damping and deceleration system and an airtight, passively controlled, display environment. It took 7 prototypes to arrive at this incredibly elegant solution.

In 2009, the Newseum won the SEDG Design Award 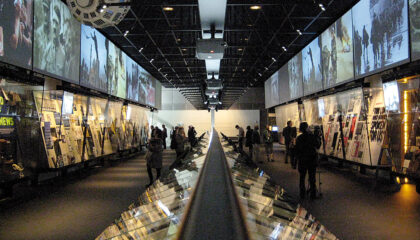 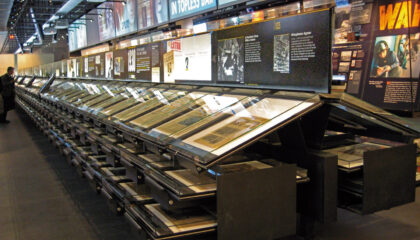 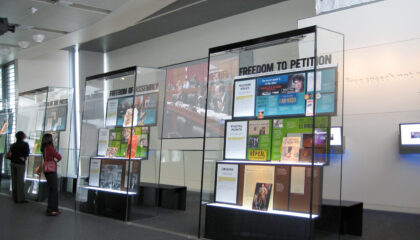 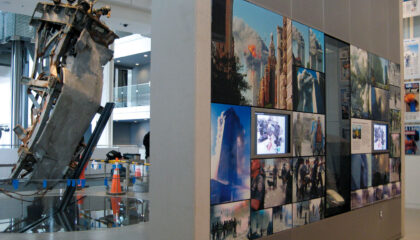 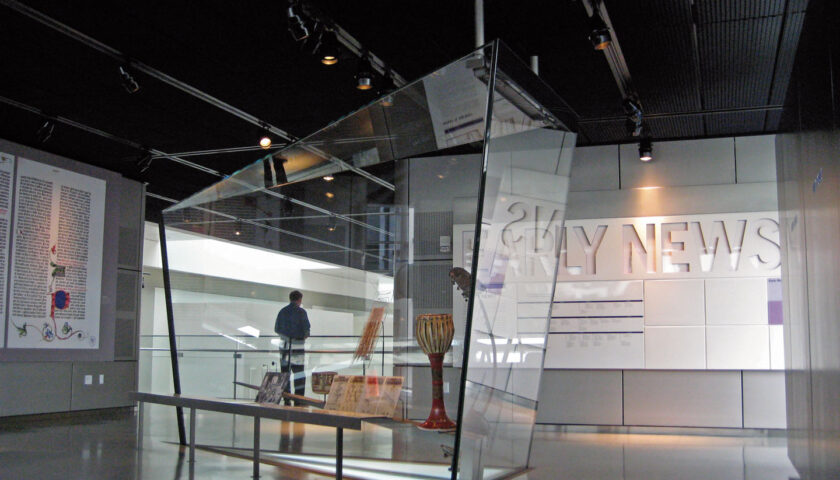 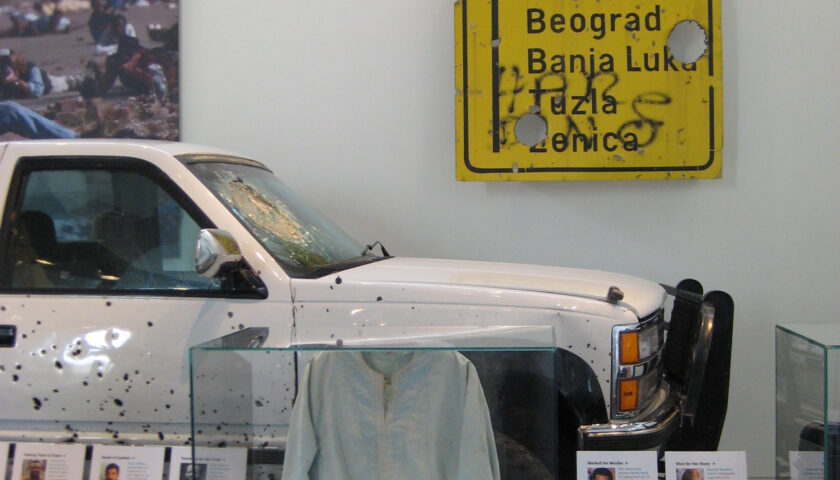