The Pesaro altarpiece is the largest work by Giovanni Gerolamo Savoldo, a painter from Brescia who worked in the first half of the 16th century. Commissioned by the Dominicans of Pesaro in 1524, the panel depicts the Madonna and Child attended by Saints Peter, Dominic, Paul and Jerome. Inspired by the recent innovations of Titian, Savoldo composed the painting in two distinct zones: the divine space illuminated by a trio of seraphim, and the earthly realm featuring natural light and a triumphant view of Venice. When the church of San Domenico in Pesaro was decommissioned in 1811 the work was moved to the Brera; in the process some elements of the altarpiece were lost, including a carved molding on the top and a platform at its base.

Because the altarpiece is so large and heavy, moving it for restoration was nearly impossible (in fact, it had only been moved a few times in five centuries, each of them documented on the back of the work). Complicating the problem, the original logistic path used during the piece’s move to the Brera in 1811 had been closed off by subsequent renovations. The Brera had the innovative ideas of both restoring the altarpiece on site as well as opening the restoration process to public view.

The architectural studio of Sottsass Associates designed a laboratory under glass, with mobile platforms to give restorers access the entire work without moving it. The Brera turned to Goppion to engineer the system, which includes a portal, a scaffolding platform with an access stair, and an armature to support the painting. The project also includes the protective exterior enclosure, a floating internal floor and work surfaces and storage units around the internal perimeter. The main element of the system is the portal, comprised of two weight-bearing columns, an exposed header, and base beams hidden by a raised floor.
The armature, which physically supported the work, was fashioned from a 10x10 aluminum bar that ran the entire perimeter of the painting. Screws and friction blocks applied to the front and back of the panel kept it in place. Specially made cushions of synthetic material ensured that the blocks never made direct contact with the wood of the painting. The armature was mounted on two swivel hinges that allowed the painting to rotate into a vertical or horizontal position.
Restorers used the mobile platform to reach areas of the altarpiece that would otherwise be too high. Once they positioned the platform at the desired height, the restorers climbed to it on a stairway located to the side and protected by self-closing gates. The platform included trays for the tools used for restoration.
Since the original restoration concerned both the paint film and the wooden support, the platform is symmetrical, such that the same spacing was maintained on both sides of the work. The structure also allowed lateral interventions on the thickness of the wooden support. The entire system was enclosed in a transparent surround measuring approximately 9 meters wide, 9 meters deep, and 5.5 meters high. A security system ensured that only authorized personnel could gain entry to the enclosure. The structure included a four-point ventilation system that could be positioned to reach any part of the work area for quick, yet non-invasive, removal of any dust or solvent fumes the restoration produced.
The restoration of the Savoldo Altarpiece was such a success from both a conservation and public standpoint that the structure remains in place and is used as a visible restoration studio for other works in the collection. 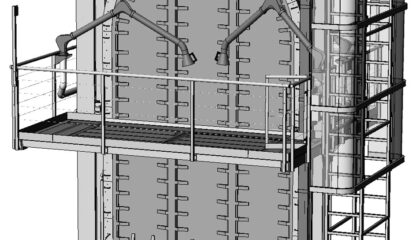 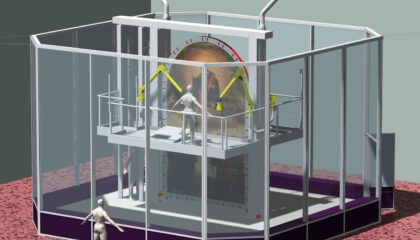 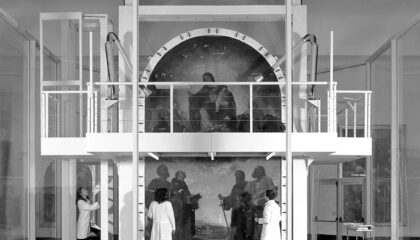 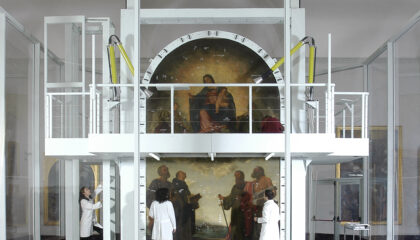