Since the spring of 2019, Raphael’s Cartoon for the ‘School of Athens’is once again on display at the Pinacoteca Ambrosiana in Milan, after a four-year restoration, coordinated by a prestigious Scientific Committee. The cartoon created by Raphael is the largest still, preserved (285 by 804 cm) and is entirely made by the hand of the Urbino master, as a life-size preparatory drawing of the Athens School, one of the four frescoes commissioned in 1508 to Raphael by Pope Julius II to decorate the Room of the Signatura in the Vatican.

Purchased in 1626 by Cardinal Federico Borromeo, founder of the Ambrosiana, from the widow of Count Fabio II Visconti di Brebbia for the exorbitant sum of six hundred imperial liras, the Carton has had a rather troubled life: requisitioned in 1796 by the French commissioner Peignon, as part of the Napoleonic depredations, it was returned in 1815 after Waterloo, but during the journey back to Italy the water infiltrated the box that contained it, giving rise to moulds that threatened its preservation. During the Great War, it was transferred to Rometo be placed safe from bombardments. After a passage to Lucerne in 1946 where it was displayed to find the funds for the renovation of the Ambrosiana, it was finally placed in Room 5 of the Pinacoteca Milanese. The work is exhibited in its historical room, with a new layout by Stefano Boeri Architetti.The idea was "to create a path of approach that would lead to the maximum possible focus on the cardboard" both to capture the details, highlighted by the careful restoration work, and to appreciate, "at different distances, the hand of Raphael, the overall view, the formidable dynamism of the bodies. To remind us that the Cartoon is a preparatory work, the work table in solid oak wood (150 years old) that accompanies it and hosts reference texts and informative videos: a space where anyone can learn more about the history and the role it plays in the construction of the fresco preserved in the Vatican Museums.

The display case designed and built by Goppion to respect the delicate conservative constraints of the work and, at the same time, to allow it to be viewed without interference, is the largest single-door showcase in the world. Superior to the greatest realizations conceived by Goppion in the past, such as the Ardabil carpet in the Victoria & Albert Museum in London and the two showcases for the paintings Victoria 1 and Victoria 2 by Gerhard Richter in the headquarters of ERGO Versicherungsgruppe in Düsseldorf, it is an experimental realization whose engineering and production has been carried out through a long series of tests that, during the course of the work, have necessitated modifications in the structural aspects. The numerous challenges represented by this project are summarized by Alessandro Goppion. First of all, the display case had to guarantee a very high airtightness (one change every 30 days) and "the airtightness of a construction is proportional to the linear metres of the perimeter of its opening (here almost 25 metres); then there was the difficulty represented by the shape of the flag (vertical) door, which forces the hinges to its short side. This solution was imposed by the dimensions of the design in relation to those of the room. This reality brings into conflict intrinsically contradictory elements, to be resolved through the engineering design: 1) the flexibility of the glass; 2) the need to make it flat at its perimeter; 3) the limited capacity of the floor with respect to the weight of the door; 4) the speed of opening in case of danger without reducing security with respect to theft. The rigidity/planarity of the glass has been obtained through the creation of a large frame for its containment, specifically equipped with a perimeter system of keyways and tenons, to ensure perfect adhesion to the rebate plane between seals and frame. Then we studied a system of "spiders" to be arranged only in the rotation phase of the sash that distribute the load on the floor, also making the rotation fast and safe. It is also worth remembering that everything has been designed and built in a third of the average time needed". The display case is also equipped with a relative humidity stabilisation system using hygroscopic buffer material and a recirculation system with flow diffusion through supply and return ducts. A second circuit is dedicated to air quality, ensured by the use of appropriate Goppion stage filters that allow the air to be filtered through mechanical procedures designed to intercept solid and chemical particulate through the use of active materials capable of stopping gaseous pollutants, potentially harmful to the work. The system is also equipped with a data logger for the detection, recording and Wi-Fi transmission of micro-environmental conditions (temperature and relative humidity). 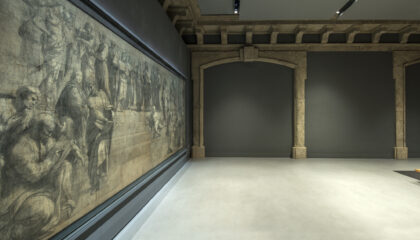 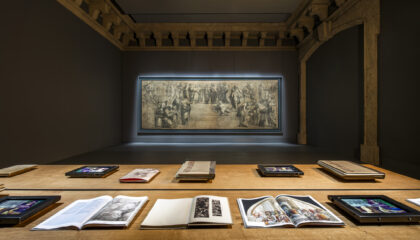 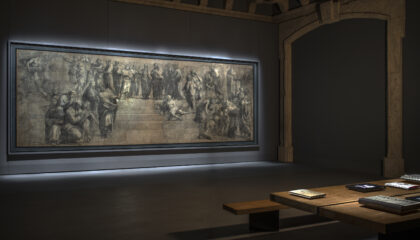 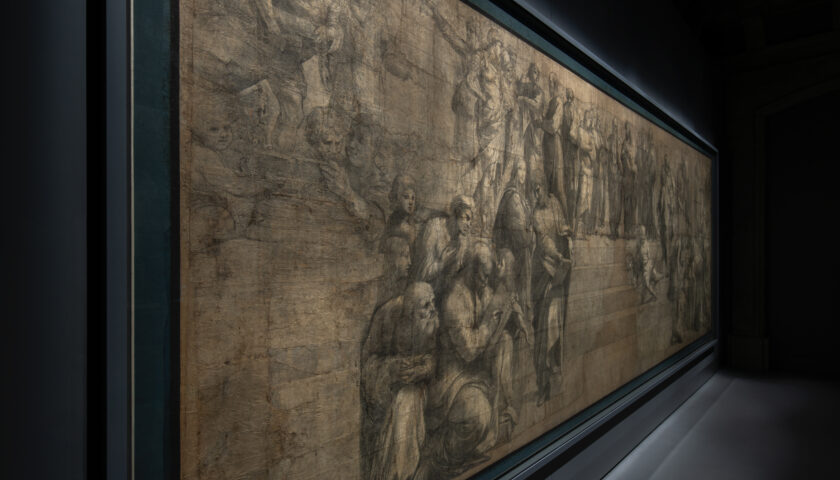