Subjected to a complete renovation, the Nationalmuseum in Stockholm was recently reopened to the public, with considerably larger spaces for exhibitions and services.

Of the approximately 700,000 pieces in the museum collection (boasting 17th and 18th century paintings and crafts, 18th French century art and 17th century Dutch art, as well as the largest Scandinavian porcelain collection), a good 5,000 will be visible after the reopening, while the others will be presented to the public on a rotation basis.

Inaugurated in 1866, the Nationalmuseum building is a symbol of Blasieholmen, the district on the Strömmen canal home to the city’s most important auction houses, antique shops and art galleries. It is the work of the German Friedrich August Stüler, designer of Berlin’s Neues Museum, and is clearly inspired by the Venetian-Florentine Neo-Renaissance style. The building has been constantly modified and adapted to the museum’s needs. Nevertheless, it had never been completely renovated and failed to satisfy the international standards now required in terms of safety, climate control, fire prevention regulations, workplace and logistics.

The five-year renovation project has created an open museum accessible to visitors, where the artworks can be experienced both on a large and small scale, preserving the integrity of the architectural heritage. The new climate control system means that the museum’s collections can be presented in an integrated manner, overcoming the boundaries between the artistic disciplines. Thus, paintings and other works more sensitive to environmental factors, such as drawings and graphics, can be presented together with applied art and design. This allows for the display of a larger number of works and improves the visitor’s experience by entwining numerous stories.

In this new journey into art, visitors will be accompanied by evocative views of the city. The large windows, previously covered by fixed shutters, will open onto the landscape, while a new lighting system will make it possible to exploit natural light to the fullest, with the light differing according to the time of year.

Each room will recount an era. The new exhibition invites the visitor to journey through the centuries, from the 16th century to the present, amongst glass objects, ceramic sculptures and jewellery. Some of the pieces are new acquisitions, which are “essential to enrich the Museum with objects that had been lacking due to choices based on different tastes according to the different eras.”

The outfitting of the Museum was entrusted entirely to Goppion, whose staff worked side by side with the museum team, with the architect Joel Sanders (New York) and with the light designer Kardoff (Berlin) to develop a family of integrated exhibition elements including display cases, bases, platforms and walls. One hundred new display cases, of different types (freestanding, wall, window case) and of a great variety of shapes, sizes and functions, house the extremely heterogeneous works of the most important and varied art collection in Sweden (over 700,000 pieces). The collection includes 17th and 18th century paintings and crafts, 18th century French art and 17th century Dutch art, as well as the largest Scandinavian porcelain collection.

The display cases are characterized by a simple linear design, with interiors echoing the shades of the plaster in the different rooms, inspired by the same colours that adorned the interiors of the 19th-century building. They assure high levels of security thanks to the use of special glass panels and are equipped with a passive system to control relative humidity by means of silica gel housed in a special compartment in the base that allows checks and replacement without the need to open the display compartment.

Among the most demanding display cases are the so-called ‘window cases’ set between the columns of the museum in front of the windows, which allow the visitors to see the artworks from the inner atrium of the building and which represented a considerable challenge on account of the structural difficulties involved. Another challenge was the imposing Royal Bed Case (over 5 metres high) containing the royal canopy bed, which involved an equally imposing installation job.

Seventy-five of the 100 display cases are equipped with an ‘intelligent’ system for the control and adjustment of the LED lights via Bluetooth, thanks to an app developed by Goppion. 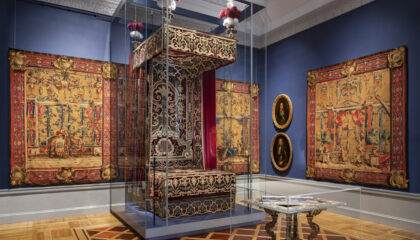 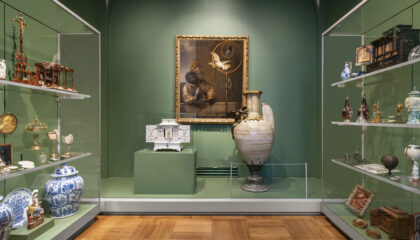 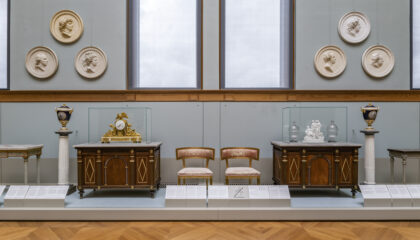 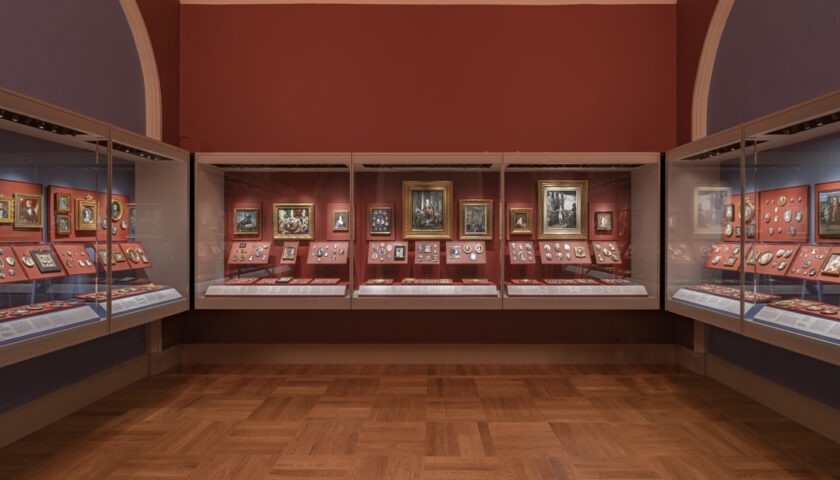 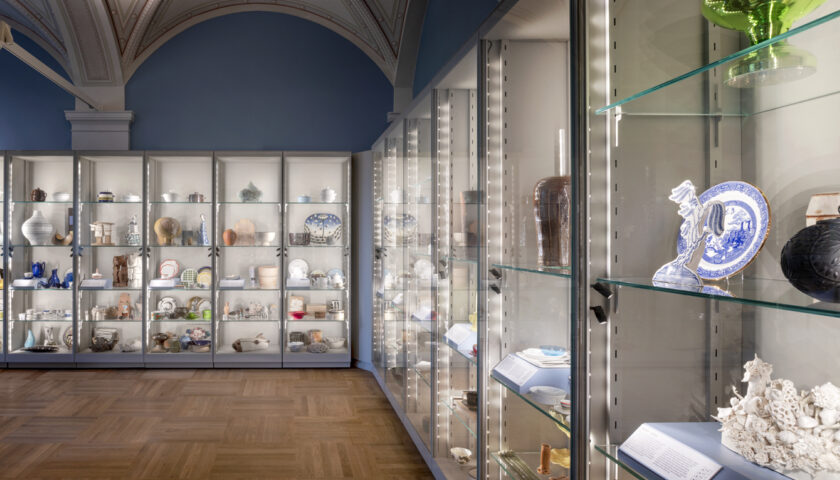