Museum of Fine Arts
Art of the Americas

The MFA, Boston, is one of the world’s preeminent art museums. In the fall of 2010 the MFA opened its Foster & Partners designed New American Wing, a $500 million project ten years in the making.
The project has enriched the ways in which visitors encounter the Museum’s great works of art, improved navigation through its galleries, and enhanced and increased space for the MFA’s encyclopedic collection (400,000 objects), educational programs, conservation facilities and special exhibitions. For the first time since the Museum’s founding in 1870, the art of North, Central and South America are presented together in the New American Wing. The American Wing’s four levels of galleries have been arranged in a broad chronology, beginning with objects from the earliest prehistoric Native American and pre- Columbian collections on the lowest level and traversing through time and genre until visitors experience mid 20th-century works, in all media, on the top floor.
Flanked by two pavilions, one north and one south, the New American Wing incorporates large areas of glass, making the Museum more transparent and welcoming to neighboring communities, as well as complementing the Museum’s historic architecture.

Goppion was involved in the engineering design, prototyping, cost control, production and installation of the cases for the New American Wing. Working along with the Museum Design Office, Goppion contributed, and continues to contribute, to the renewal of many other galleries in the existing building.

The ultimate goal and challenge of this project was to collaboratively utilize the creative talents and energies of a diverse team to create a superior product and, ultimately, a truly unique visitor experience. Given the scale of the project – over 175 major constructions arrayed over 13,000 square meters and four levels of galleries - the challenge was also to deliver a very large and complex project on budget and on time, integrating for each group of cases the conservation requirements of the Museum, while simultaneously striking the right balance between the concept design of the architects and the needs of the curators. Despite the geographical distance among The MFA, Foster & Partners and Goppion, these goals were achieved by developing a common reference, electronic platform, and “case language” that allowed each member of the team to play its role at the right time and in strong integration with the others.

The MFA and F&P developed preliminary design concepts and defined the overall project budget. Once we were on board, the gallery design team worked together with Goppion to complete the design and finalize the budget as part of the design development process. During the initial phase Goppion also worked with the MFA on defining the conservation, security, and maintenance criteria. Other considerations such as lighting, case access, object mounting and label installation were further refined with the team as part of the design development process. This process took almost one year. Once the definition of the major case types and “families” was complete, Goppion began the process of prototyping to better understand the physical realities of the various design concepts and the limitations embodied in all the considerations that go into the fabrication and assembly of display cases. As each prototype was completed and evaluated by the team, the design, which had only existed on paper and in drawings, became real.
Following prototyping and final approvals, the production and the installation were organized in relation to the priorities given by the Museum. Technically, some of the case types for the MFA are among our most sophisticated and finest work to date. Glass ‘boxes’ of exceptional scale house ship models, Eames chairs and pre-Columbian art with equanimity. Wall mounted cases with 6-meter-long hoods weighing nearly a ton can be operated by a single curator. Gossamer thin top hinges on the jewel-like display vitrines are invisibly integrated into recesses machined in the top glass. Ultimately, the completed casework stands as a tribute to the ingenuity, skill, and cooperation of the entire team. 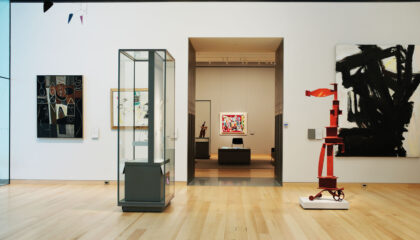 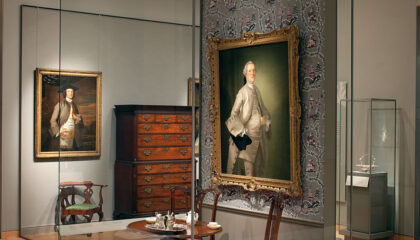 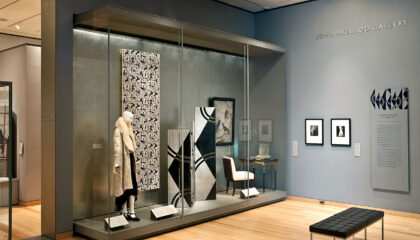 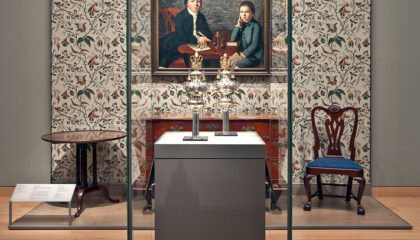 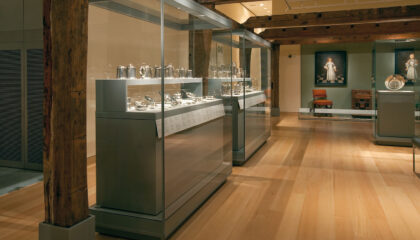 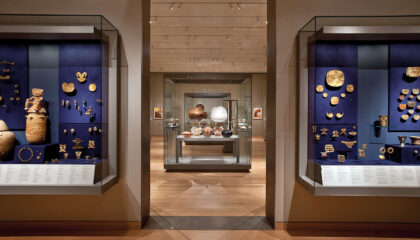 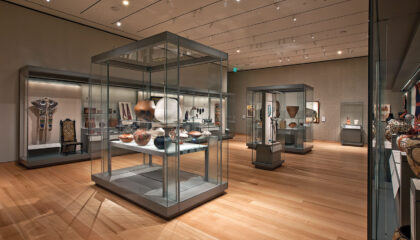 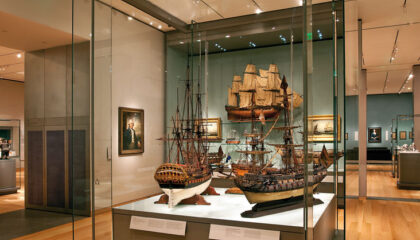