The London Mithraeum, one of the most recent and important discoveries of Roman Londinium, has returned to its original location below the new European headquarters of the Bloomberg company designed by Lord Norman Foster. Thus, the temple of Mithras finally became accessible to the public on November 2018.

The museum plan by Local Projects – the firm that designed New York’s Memorial Museum dedicated to the victims of September 11 – relies completely on emotionalism and fascination. Austere and minimalist (as defined by the designers themselves) and immersed in a dark confined space seven metres below street level, the layout involves a refined mix of lights and fog banks which, to the eyes of the visitor, recreate the illusion of walls and columns emerging from the ruins. Visitors can walk around the perimeter of the temple and enter it on suspended walkways. At the back, the image of Mithras killing the bull illuminates the apse, while sounds of voices, bells and horns complete the multi-sensory experience, enveloping the visitor in an aura of mysticism.

To gain access to the archaeological area, the visitor must cross Bloomberg SPACE, an art gallery on Walbrook Street where contemporary artworks will be exhibited on a rotating basis. Here, a spectacular Goppion display case hosts a selection of the archaeological specimens discovered during construction of the Bloomberg complex. These artefacts are very well preserved due to the humidity of the soil. The combination of about 600 objects of different nature and function gives a good idea of the richness and heterogeneity of the collected material. Particularly interesting is a set of over 400 financial documents in the form of waxed tablets, including the earliest ‘manuscript’ known for the United Kingdom (57 CE), which recount the business and everyday life of the nascent city of Londinium. The museological set-up, like the excavation and study of the specimens, was coordinated by the archaeologists of MOLA (Museum of London). The large Goppion wall showcase (430 cm x 350 cm high) was designed by Wendy Joseph (Studio Joseph of New York), who worked closely together with our staff to refine its details. It has a single large door with specially designed motorized opening, allowing a full frontal view of the displayed objects without any annoying visual interruptions. The interior design is singular and innovative, consisting of fabric-covered polyurethane pyramids of different shapes and sizes which make it possible to arrange the specimens in an original, irregular exhibition mosaic recalling Renaissance carved stone facades and their play of light and shadows. The layout is completed by tables created for the offices (which also host archaeological materials) and for the bar, with electrical outlets powered by batteries that can be recharged without the need to dismantle the structures. 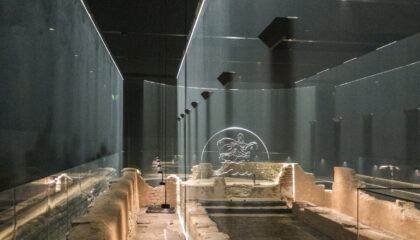 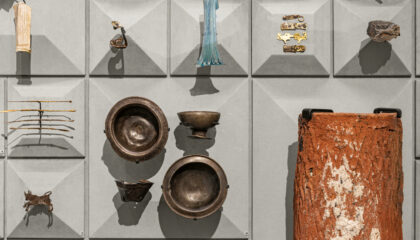 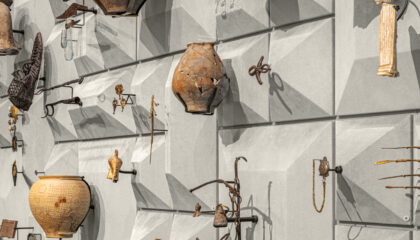 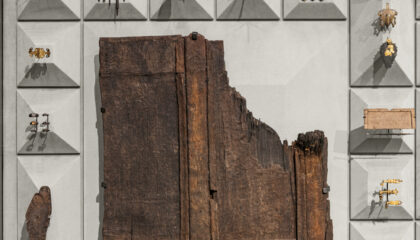 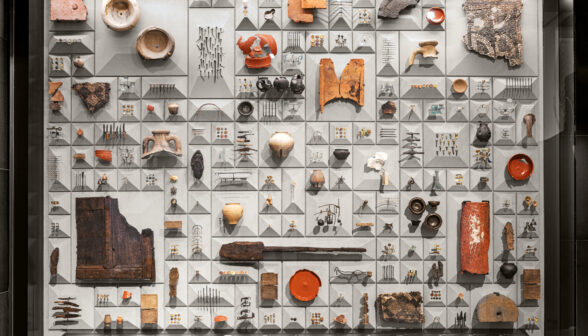 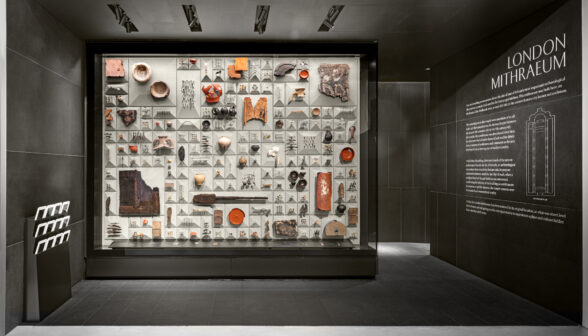 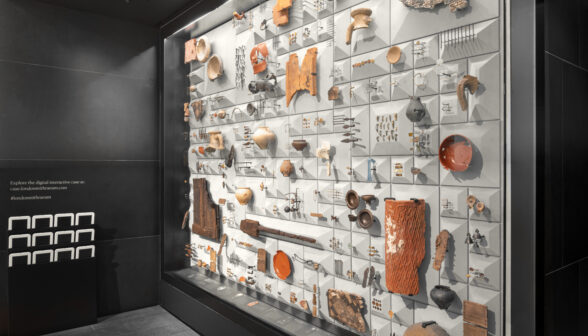