On the occasion of the 125th anniversary of their jewellery, the Ganjam family, one of India's leading luxury brands, wanted to offer its city a new flagship. With their Hindu and family roots and know-how of more than a century, the famous jewellers aspired to place their maison in a contemporary environment that could henceforth promote exports. The project had to respect the spiritual dimension of this southern India
and their heritage of craftsmanship - marked by charisma and humility.

The capital of the state of Karnataka, Bangalore is also the heir to the last Hindu kingdom of Vijayanagar, whose magnificence of the royal city of Hampi has made the international reputation of its princes and Dravidian architecture since the 14th-16th centuries. The RDAI project drew inspiration from these roots and from Vastu Shastra, a 10,000-year-old treatise on Vedic architecture that evokes the energy of space and the ancestor of Feng Shui. In addition to the energy balance of the building, it governs its location, orientation, access, materials and decoration.
The square plan of the site identified by the customer lends itself to perfection. The light-cut stone covering the facades, walls and floors revives the grandeur of Hampi's temples and palaces, giving the flagship store a timeless contemporary feel. In fact, if the porch appropriates Ayurvedic fractal geometry, for Europeans it evokes the concrete mouldings of modern architecture.
Its museum dimension continues inside, where the plan is reminiscent of a Vashtu mandala. Barely "inhabited" by a few shop windows and benches, the double-height vestibule frames on one side a central volume made of golden teak trunks evoking the lush roots of a giant Banyan Tree, and an imposing stone staircase reminiscent of Pushkarani, these spectacular legendary cisterns of Hindu temples.
In the heart of the ground floor, a decidedly empty space set with black lava and teak embodies nothingness where everything is air and silence. In the four corners of the gallery of this esoteric cloister and on the first floor, guests are received around one of twelve rosewood inlaid tables, each one theatrically laid on a luxurious silk carpet whose motif dilates, blurring it, that of a peacock feather. The pieces of the two collections - heritage and contemporary - find their maximum splendour in this temple of refined Indian jewellery with its subtle illumination. 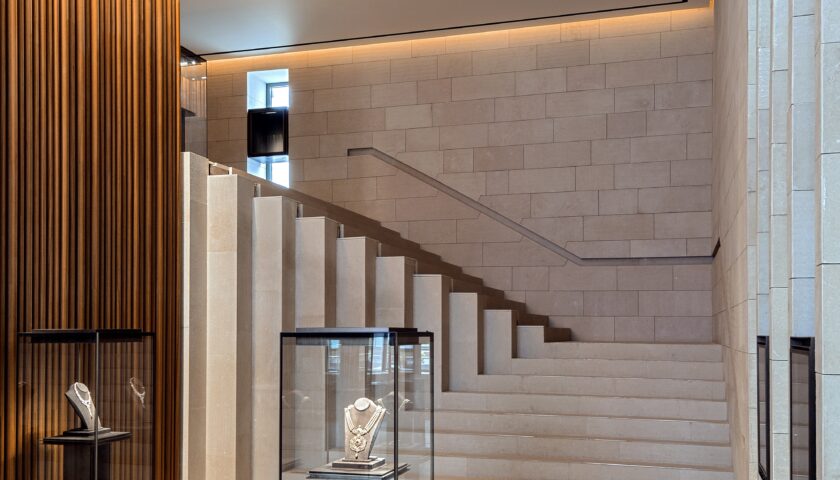 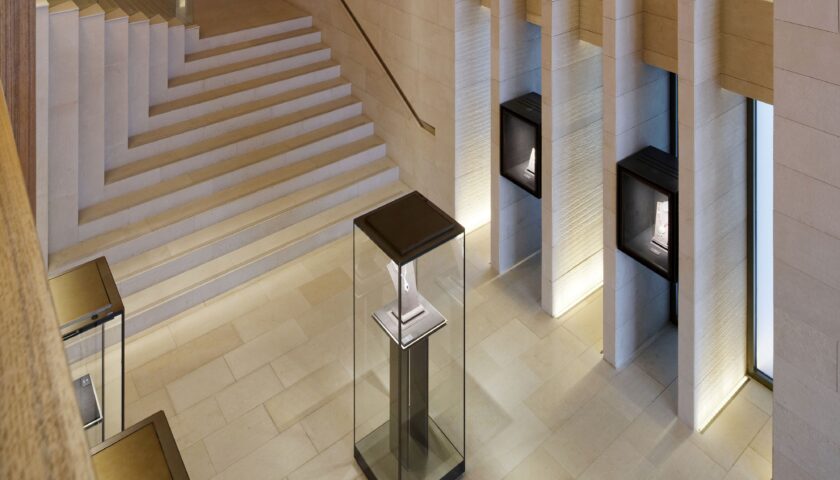