The British Museum is among the major museums that, for the past couple of decades, have been renovating their collections of Islamic art.

The new Albukhary Foundation Gallery of the Islamic World, created in cooperation with the Malaysia based foundation, aims to promote the dialogue between diverse people and cultures, along with the values of peace and coexistence, through the exhibition of artworks and artefacts which showcase the deep connections between the Islamic, Mediterranean and European cultures.

The new gallery is exhibiting masterpieces of art and material cultural artefacts from an immense geographic area stretching from the Mediterranean to the far east, from Africa to China, along a chronological arch that goes from the origins of Islam to the present date. Ranging from archaeology to decorative arts, artworks, printing, ethnography and fabrics, to modern and contemporary art, the British Museum has radically redesigned the exhibition of its rich collections, to which it has allocated a few galleries on the first floor, in the heart of the majestic building, which had been closed to the public until today (rooms 42-45).

Organised chronologically and by geographical area, the exhibition is divided into two main galleries: the first covers the period from the beginning of Islam to the 1500s, showcasing the great mediaeval dynasties with broad references to the nearby galleries where Byzantine and Viking objects, from the era of the crusades and Islamic Spain, show the influence the Islamic arts had on the arts of Occident. In the second gallery, the visitor encounters works which represent the peak of creativity under the three main dynasties which have ruled the Islamic world from the 16th century onwards: the Ottoman, the Safavid and the Mughal. Their illustrious patronage saw the creation of magnificent objects, which include ceramics, jewellery, and paintings that are among the jewels of the British Museum's collection. An ample space has been also allocated to the 'minority' cultures of the non-Muslim community and to the role played by the Jews, Christians, Hindus, Zoroastrians and others within the social, political and cultural life of the region.

The architects Stanton & Williams have provided a decidedly characterised gallery.

As with the earlier Waddesdon Bequest Gallery, the large display cases, the true and proper exhibiting spaces, shun the minimalist and impersonal model to vindicate, on one hand, the architectural connotation of the gallery, giving it a style of uniqueness and distinction from the rest of the museum, while at the same time providing a new context in which to frame the exhibited works, which becomes an integral part of the museum's message and communication. From a museological point of view, the small exhibition spaces cut into the display walls are noteworthy as, while not forming complete isolation from the others, they showcase particular pieces and artefacts.

The engineering and production of the gallery's display cases has meant a notable challenge and effort for Goppion, both from a quantitative and a qualitative point of view.

It is, as a matter of fact, sixty wall display cabinets, island display cases and table display cases of great dimensions and of a particularly high structural complexity.

Some elements shared by all the display cases are the large dimensions (the island display cases have an exhibiting volume of 28 m3) and the breadth of the parts that can be opened.

All the display cases have a mechanical opening system. In the wall display cabinets the hinged doors are suspended, so as to prevent possible deflation of the plates throughout time. In the island display cases the opening system is, instead, by shifting, which is no small engineering feat, being this a structure made entirely out of glass.

The large openings, needed to grant the staff easy access to the exhibiting spaces (for the island display cases the ratio between fixed joints, i.e. glued glazed sheets, and movable joints, or the operable doors, is 1:9) required particular attention to be paid to the seals and preventive preservation. Nevertheless, our patented magnetic gasket systems allowed us to achieve the highest quality presentations: given the standard requirement of major museums of a change of air every 10 days, the wall display cabinets have a (certified) performance of 1:40 and the island display cases of 1:15.

An equal effort was also required for logistics, both for moving the large glass sheets, and for assembling the display cases on site which required a close and very articulate coordination with the museum's staff and the deployment, for over six months, of specialized installation teams made up of 18 individuals. 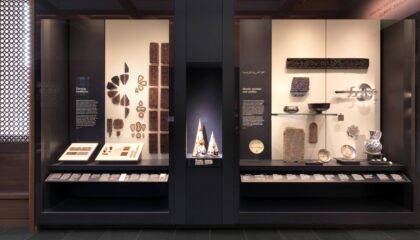 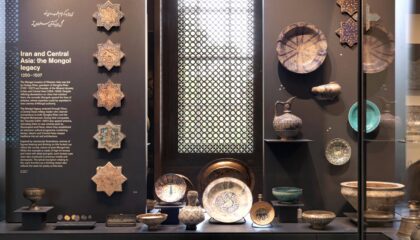 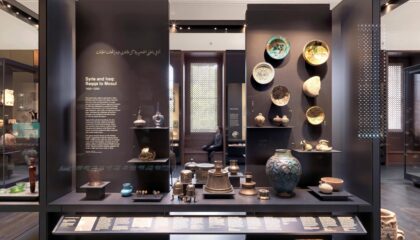 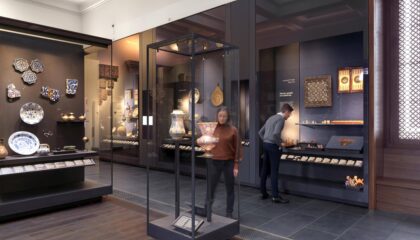 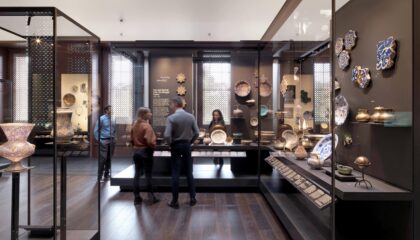 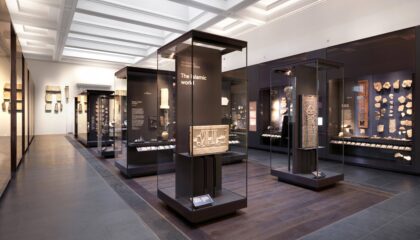 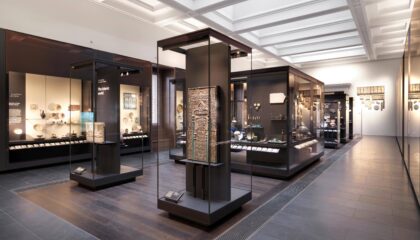 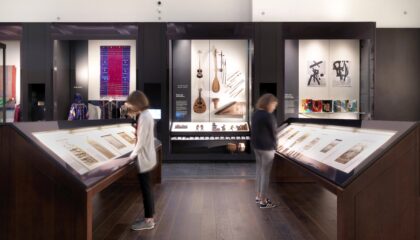 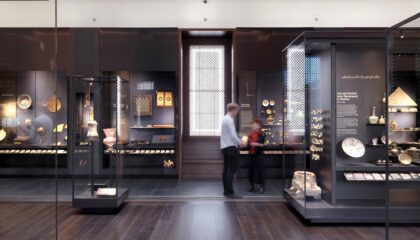 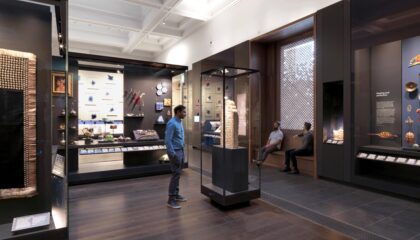 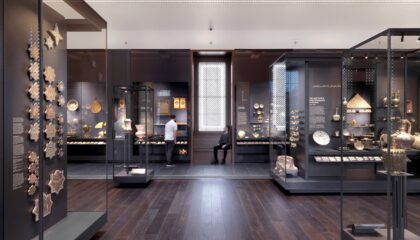 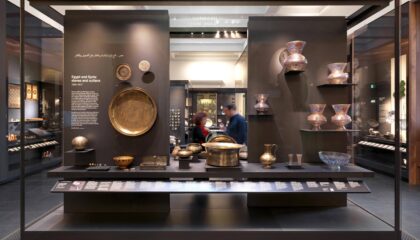 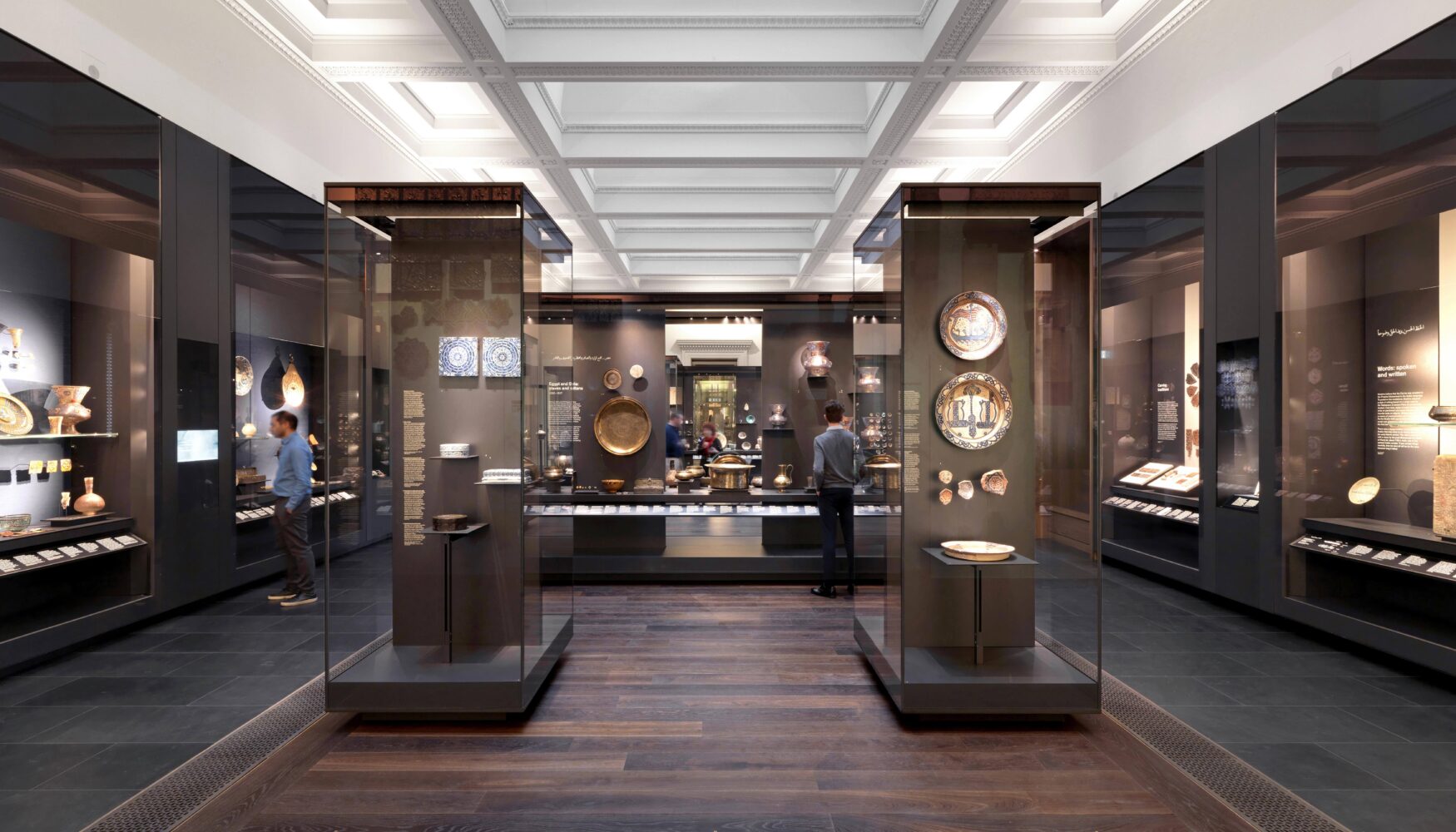